AMONG THE ORIGINATORS OF THE RUSSIAN COOPERATIVE INITIATIVE WERE THE DECEMBRISTS: THE FIRST CONSUMER SOCIETY NAMED THE BIG ARTEL WAS ESTABLISHED IN 1831.

During their stay in the Chita prison, Decembrists condemned to hard labor in exile as a result of the failed uprising of 1825 on the Senate Square, struggling for survival in a harsh, unfamiliar place, created a cooperative holding, a voluntary association without a charter. The written Charter of the Big Artel was unanimously adopted in 1831 at the new place of exile, at the Petrovsky Works in the Trans-Baikal Territory.

It was at that time when 106 clauses of the Charter set forth the basic principles of cooperation, which are relevant until now: voluntary membership, democratic management, availability of information, control by shareholders and mutual aid.

AT ALL TIMES, ETERNAL PRINCIPLES OF COOPERATION HAVE BEEN: VOLUNTARY MEMBERSHIP, DEMOCRATIC MANAGEMENT, AVAILABILITY OF INFORMATION, CONTROL BY THE SHAREHOLDERS AND MUTUAL ASSISTANCE.

This initiative, that was vital for the Decembrists, turned to be quite popular: at the end of the 1890s, there were more than 500 registered consumer societies of this type. In August 1896, the Nizhny Novgorod Fair hosted the session of a section of the commercial and industrial congress attended by 60 representatives of 32 Russian cooperatives. They discussed draft Regulations on cooperative unions and the Standard Charter of consumer societies and sent these documents for the approval by the tsarist Council of Ministers. In May 1897, the Normal Charter was approved, and the Regulation on Associations was rejected, as the tsarist government did not welcome all-Russian alliances. However, this did not prevent cooperators from convening congresses at the regional level, and also from establishing the All-Russian Cooperative Center under the auspices of the provincial Moscow Union of Consumer Societies (MSPO).

The House of MSPO at the Nizhny Novgorod Fair

COOPERATION IN THE USSR

The economic policy of the new Soviet state demanded stricter hierarchy, so, as early as in 1918, all consumer cooperative unions were forcibly included in the Centrosoyuz, and a year later the formation of the structure of the cooperative system was completed. The system was built on a territorial basis: primary consumer society — regional union (raysoyuz) — provincial union (gubsoyuz) — central union (Centrosoyuz). This principle is still applicable (see the structure of cooperation).

Centrosoyuz was also transformed into a parastatal entity, and only in the 1920s it could re-enact for a short period of time the basic principles of cooperation the operation: the joint-stock system and admission fees were restored, and the management bodies were again elected. This was a requirement of the new economic policy (NEP) in agriculture, which replace the so-called surplus-expropriation, during which up to 70% of the harvest was seized, with a food tax which reduced this share to 30%. After payment of the tax, the peasants had surplus crops available, which they could exchange via cooperatives for the products and tools they needed.

THE STRUCTURE AND ACTIVITY OF COOPERATIVES GREATLY DEPENDED ON THE DIRECTION OF THE STATE ECONOMIC POLICY.

The cooperation played a role during the Great Patriotic War: it solved the tasks of supplying and strengthening the rear, provided financial support to the front (acquiring state loan bonds for a significant portion of its funds) and even gave the army much of its road transport. 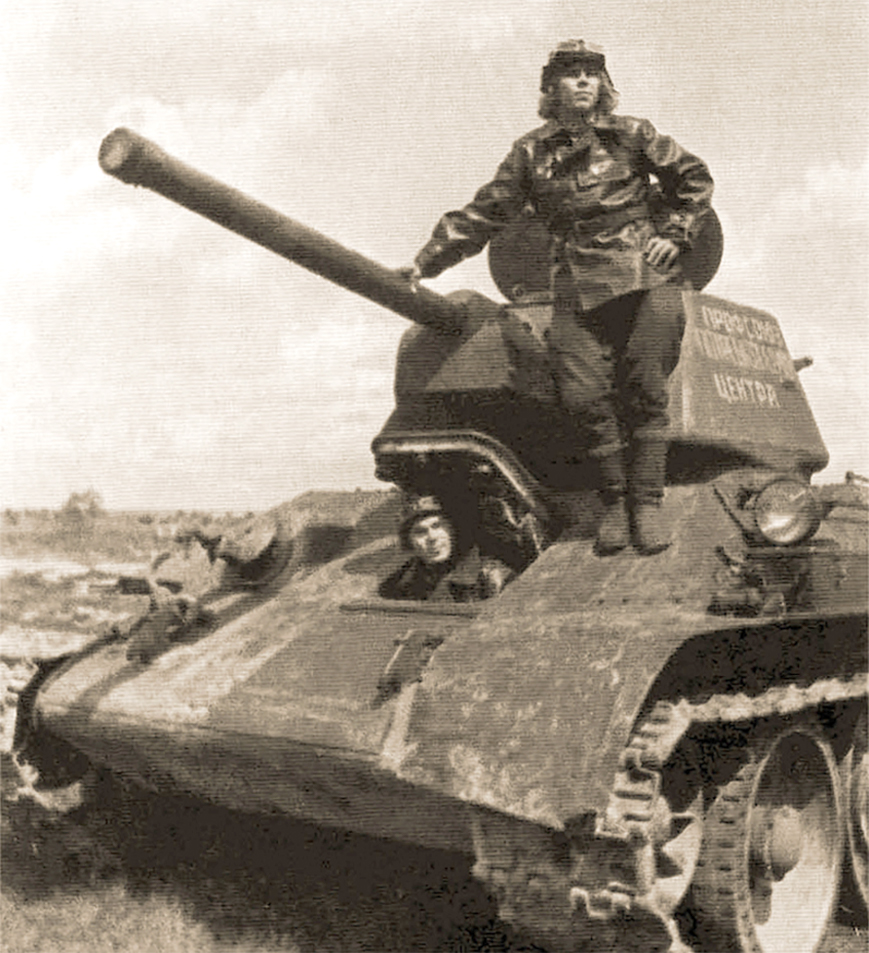 The second tank column of the T-34 and TO-34 tanks, built with the money of the workers of the Centrosoyuz and transferred to the 31st Guards Tank Brigade 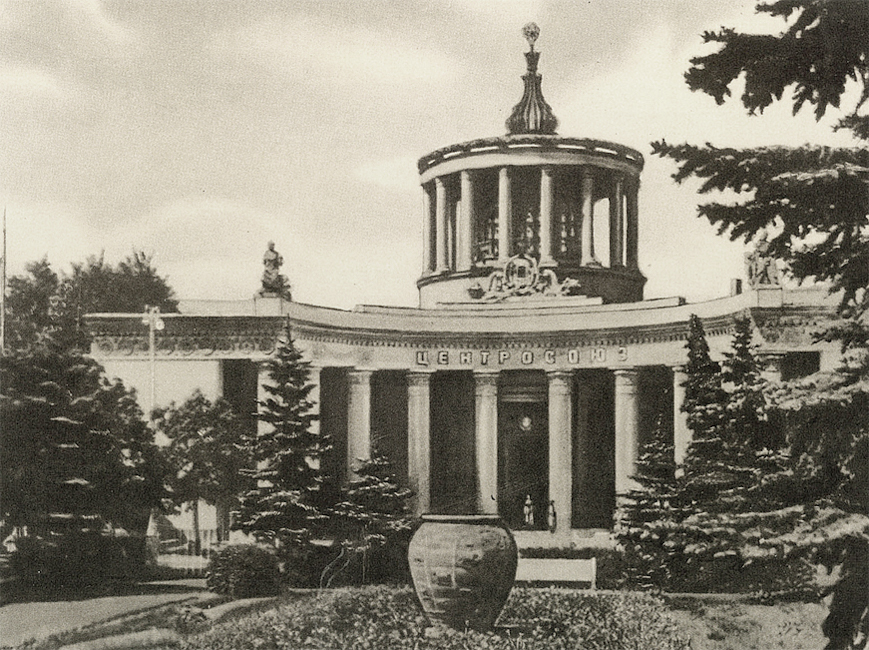 Pavilion Centrosoyuz at VDNH (at the time of shooting - № 27)

It should be noted that after the collapse of the NEP and during the whole period of the existence of the Soviet Union, Centrosoyuz experienced many structural changes (splitting Centrosoyuz into Centrosoyuzes of the USSR and the RSFSR and their subsequent merging; spin-off of Rospotrebsoyuz from Centrosoyuz etc.), which, in turn, occurred as a result of state interference with the activities of cooperation. In general, we can say: instead of being controlled by shareholders – let us recall one of the main principles mentioned above – Centrosoyuz and cooperation were under the actual management of the Communist Party. The situation hardly changed even during the “Khrushchev thaw” and after it; and this despite the fact that at the beginning of perestroika the consumer cooperation ensured up to 27% of the turnover in the entire USSR (and as many as 80% in rural areas)! By the end of the 1980s, the cooperation network included almost 400,000 retail trade enterprises and over 100 thousand catering establishments, which totally employed 3.5 mln people. The number of shareholders at that time was about 25 mln people.

The Fifth Congress of Consumer Cooperatives of the USSR

In the process of a chaotic transition of the country from a command economy to a market one, all this impressive material base suffered huge losses (however, only 25% of the total number of lost facilities were sold, and the number of shareholders in the first years after the collapse of the Soviet Union was reduced by almost half); besides, the experience of competition in market conditions, which had been gained by the cooperatives before 1917 and was used by them shortly afterwards in the years of the NEP, was forgotten during the existence of the USSR.

Nevertheless, the cooperation has withstood, having managed first to adapt, and then to start regaining its lost positions. In the early 1990s, Centrosoyuz, which actively cooperated with the Supreme Council and the Government of the Russian Federation, helped provide the legal framework for the revival of cooperation, focusing on its importance as a socially-oriented system. And although this process is far from complete, Centrosoyuz of Russia, regional consumer unions and most of the consumer societies have done significant work in recent years, allowing cooperatives to excel in competition in market conditions, while retaining the social meaning of its activities inherent in it originally.

COOPERATION IN RUSSIA RETURNED TO ITS ORIGINAL PRINCIPLES, REMAINING COMPETITIVE IN A MARKET ECONOMY AND CONTINUING TO PERFORM ITS SOCIAL MISSION.

The main building of the Centrosoyuz is a beautiful mansion built in 1907 by the design of I. Rerberg